From the Web: Using Applied Behavior Analysis with Individuals with ASD

ABA seeks to determine the relationship between what is going on in the environment and the behavior itself. Ultimately, this relationship can help us figure out how to affect behavior, and in the end, we may be able to make changes that lead to behavior improvement. The best part about all of this is that this is a science – one that has been around since 1913. That’s over a century of support for this approach! 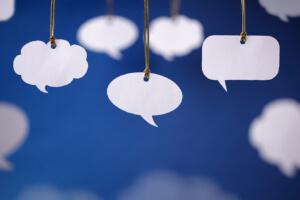 How does reinforcement help me?

Many people think of positive reinforcement when they think of ABA, such as giving kids food for doing things right. While this could be a form of reinforcement, the truth is that reinforcement occurs every day in many ways for any skill acquired. Over time the reinforcement fades.

How do I know what’s reinforcing?

It’s important to remember that every person is different in what is reinforcing for them. Remember, the only true way to know if something is an effective reinforcer is to see the behavior increase. To really understand what is reinforcing for any one person, you have to know what motivates them. If something is highly valuable as a reinforcer, a person will do whatever they know to do in order to get that reinforcer. For example, if chocolate is very valuable to me as a reinforcer, then I perform all the behaviors I know of that get me chocolate, such as going to a store and buying it. Keep in mind, what is valuable at one time may not be valuable at another time. Chocolate may be very valuable at the end of a long work week, but low in value at 5am when the alarm goes off.

How do I know what to target?

Knowing how reinforcement works and what is reinforcing for an individual lays the groundwork for effective skill-building and learning. With this tool in hand, you can better assess the situation and create a plan for change. Focus on what behaviors you want to see happening, develop an attainable goal, determine if any teaching needs to occur, and provide reinforcement for achievement of the skill/goal.

Think about the example of the 2+2=4. This is a very basic skill and in order for it to be acquired, reinforcement had to occur. When picking a goal, consider all the skills necessary to achieve the goal. Look at the situation and determine if all these skills are in the child’s repertoire. Some may require teaching and immediate reinforcement. Others may need to be put on hold until pre-requisite skills are learned. Break down the larger task into smaller, more attainable chunks; then, decide how you will reinforce each task. As these become mastered, provide reinforcement for demonstrating other, perhaps more complex steps in the overall goal. Then, when your child is starting to demonstrate the larger goal, provide reinforcement at the end of this longer, complex skill. Once it becomes a more fluent skill, determine how you can fade reinforcement out or make it a more naturally occurring reinforcer.

Continue reading the full article at pathfinders for Autism